Intensified droughts, water shedding and government-sanctioned water tanks paint a picture of doom and gloom for agricultural endeavors in South Africa. Conversely, experience of heavy storms, hail storms and more frequent localized flooding which test the country’s infrastructure, disaster management and, of course, food production showcase the intensity of climate change in the country. A consequence has been in Agriculture, as an industry, losing its footing as a main contributor to South Africa’s gross domestic product (GDP) and being surpassed by other industries such as Tourism.

Climate change is not a buzzword, a fad or the new ‘in thing’ in 2020. An important risk associated with climate change is increased temperatures, which in turn affects rainfall, seasonal patterns, a plants’ phenological growth (phases in the plant’s development which require certain thresholds of sunlight, heat and moisture) and therefore how much can be produced (the yield) on a plot of land.

The Siyazisiza Trust has seen and experienced the effects of climate change in the north eastern Kwa-Zulu Natal since 2014, when the region experienced a devastating drought which resulted in about 40% of the Trust’s supported community farms grinding to a halt due to a complete lack of water for irrigation. For over 30-years the Siyazisiza Trust has been supporting rural community farmers across north-eastern Kwa-Zulu Natal to improve production and make the most of their land. The effects of climate change in the region, Kwa-Zulu Natal and South Africa at large, have pushed the organisation to revise its operational strategy. 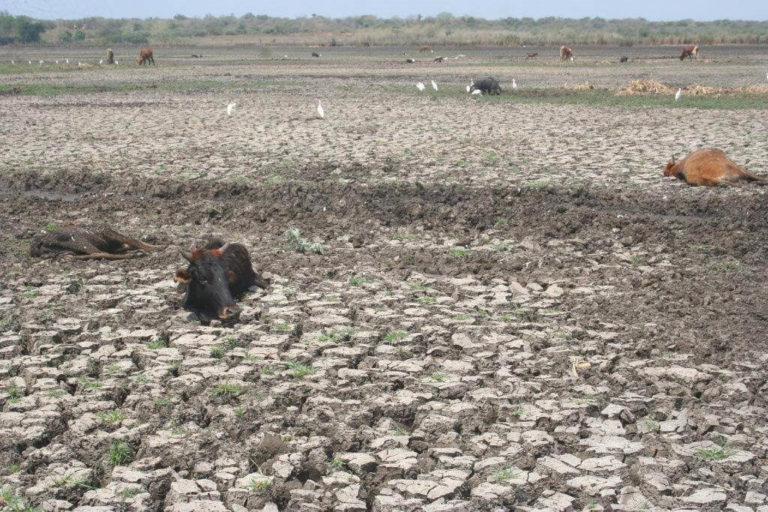 In a 2019 interview with Alba Amorós (a South African-based correspondent journalist from a Spanish national daily newspaper called ABC); Brendon Nithianandham, from the Siyazisiza Trust, highlights daily challenges faced by small-holder rural farmers as a direct consequence of climate change and increasing risks in the field (read the full interview here: https://www.abc.es/sociedad/abci-africa-jaque-crisis-climatica-201912020104_noticia.html).

Nithianandham, with his advanced practical experience in permaculture principles of farming, notes how current climatic conditions challenge a mindset shift for small-holder farmers. Part of his role at Siyazisiza is to ease farmers out of their traditionally held views to more contemporary thinking patterns that are responsive to climate change.

To address these challenges should be at the forefront of any organisation that works with farmers and/or food production. After conducting preliminary research and introspection post- the 2014 drought, Siyazisiza’s resolution is to incorporate innovation in our farming methodologies. The organisation has thus since evolved to align its programmes and operations to pursuing a long-term impact of supporting resilient, healthy and self-sustaining rural farmer communities and agri-enterprises. Therefore, since 2014, Siyazisiza’s operations have centered on climate resilience. This has informed our drought tolerant crop production programmes as well as agro-processing to add value to these crops.

Climate Resilient Agriculture can be defined as ‘agriculture that reduces poverty and hunger in the face of climate change, improving the resources it depends on for future generations.’ (Christian Aid, Time for Climate Justice 2015). Climate Resilient Agriculture intends to transform the current systems, and has a wider perspective than increased production only. It supports food production systems at local, regional and global level that are socially, economically and environmentally sustainable.

Siyazisiza’s approach to building resilience to climate change includes the re-introduction and promotion of a range of more drought resilient crops. Ancient grains such as sorghum, millet and grain amaranth are not only far more drought tolerant than most other commonly planted crops, but are also increasingly popular for their relatively high nutritional profiles and therefore have the potential to contribute to food security.

In the past four years, Siyazisiza’s overarching programme (the Livelihood and Food Security Enhancement Project) has gained immense support from the First Rand Foundation’s Wesbank Masilimeni’s Programme. Through this partnership, the First Rand Foundation catapulted Siyazisiza’s vision to increase the resilience and sustainability of food security projects where it operates. Furthermore; over the past two years, Siyazisiza has increasingly shifted to a market-driven approach with the aim of involving youth in agriculture and developing effective value chains rooted in a strong and formalized access to market.

Climate change is not a new phenomenon, nor is it solely a domestic experience. While there is still so much to learn about climate change, its effects and what it means for the future of agriculture, Siyazisiza embodies the notion that ‘success is borne out of adversity’ and is determined to move away from problematizing to actively seeking long-lasting solutions. Our resolution has been sustainability and innovation, which is a consequence of the 2014 drought. In so doing, we seek to create the necessary conditions for diverse economic activity and food security through climate resilience.

For more on our interventions and if you are interested in collaborating in developing rural small-holder farmer agri-enterprises with Siyazisiza Trust, go onto our website at www.siyazisiza.co.za or for general inquiries, email info@siyazisiza.org.za