Fresh Mindset for a Fresh Harvest

Where it operates, the Siyazisiza Trust (or, Siyazisiza) seeks to confront young people’s indifference to agriculture head on. Siyazisiza’s opening of the Zululand Agro-Enterprise Centre in Obanjeni – currently primarily responsible for agro-processing – offers technological systems that interest young people and may bridge the gap between youth and agriculture. However; there is still need for the next generation of farmers in the fields, providing quality and sustainable produce, root and stem.

“To us, Fresh Harvest is not just an organisation…it’s something that’s inside of us. It’s who we are. As you see us now, we are the people of the soil.”

Fresh Harvest. That’s the name that four young men from Obanjeni, near Mtunzini in the North of Kwa-Zulu Natal, landed on when deciding what to call their 1.2ha farming project. The team has been working together since August 2018. They started working with Nomcebo Zaca, the regional Rural Economic Development (RED) Officer, around July 2019; after attending a youth engagement meeting initiated by the Siyazisiza Trust. Realising the high smallholder farmer average age on their database, the Siyazisiza Trust (or, Siyazisiza), began a targeted campaign to involve more youth in their projects.

Before starting Fresh Harvest, the four partners – Simphiwe Mthembu (37), Sabelo Khuboni (30), Sifiso Yendi (29) and Wonderboy Mtshali (22) – had some background in farming, with each having a sizeable garden in their homes. Khubone and Yendi had even previously established co-operatives albeit separately. Unfortunately, their partners weren’t as enthusiastic and slowly left the respective co-operatives, eventually rendering them illegitimate. For their next attempt at joining forces as a team of smallholder farmers; they sought like minded individuals, with a passion for farming and an understanding of the delayed gratification that comes with farming.

From the onset, Khuboni declares that their passion for farming is not solely economically driven. For them, making money is a benefit, but their core interest is in ensuring nutritional security for their communities.

“As the population is increasing, they need food. Healthy food. Because when we look at it now, a lot of food is genetically modified. And a lot of it has fertilizers, which weakens people’s health. So, when we considered it, we thought to go back to organic farming on one side of it… And we realized that people always need food. Anyone who is working is working towards putting food on the table…There will never be a time where food goes out of fashion.”

That is why they have a medium- to long-term vision for their growing garden. Currently, any sales made on the produce is not considered as a profit, but is used as seed money to increase their farming area. Their objectives being: to expand the garden, supply retail markets and create job opportunities especially for other youth.

“For us, in terms of growth, our growth is determined like this: if we have planted three lines, and we make money from that, then we can expand by taking that money and buying more seeds to expand our garden to 16 [lines]. That is an achievement to us, on its own. Then from there, we grow, so that when we supply, we can supply a large quantity. So, growing our farming area – that’s what our profit does. We had green peppers, which we supplied to Spar and then we bought seeds with that, and then expanded as you can see.”

“We want to expand dramatically so that in future, we are not the only ones that benefit…we wish to see other youth and to create job opportunities for other people.”

For Fresh Harvest, young people’s lacklustre involvement in agriculture can be understood in two ways:

But this attitude does not stop them from trying to engage youth in their area. While Yendi conducts workshops on how to establish co-operatives, start a company, etc. around the villages, Khuboni opens the garden for practical analyses and enquiries especially to students who live in the area. For Mthembu, being a bit older than his partners is not a hindrance. He highlights the importance of working towards a common goal when in a team.

“What’s critical is working together and respecting one another. We don’t look down on one’s idea or view, nor discriminate in that this or that view is right or wrong. What we do is we work together so as to achieve something that is progressive that speaks to our objective.”

Without a steady water supply nearby, the team’s main challenge is proper irrigation. In dire situations, they rely on the grace of a neighbouring farmer, and have the additional task of carrying the water to their plot in buckets.

They started working with the Siyazisiza Trust in the hopes of getting assistance with such issues, learn better methods to grow their farm and access markets to provide them with a fresh harvest. Conversely, partly due to changing weather patterns in the region – and country as a whole – they also experience undesired high volumes of water at times. To ameliorate this, the group has sectioned off two parts of their garden on either side with sugar cane. This allows large quantities of [rain] water to get sucked up by the sugar cane and flow in controlled amounts to their vegetables.

Fresh Harvest mainly farms onions, green peppers and beetroot. On the 17th October 2019, with Siyazisiza’s help, the team finally took their first batch of beetroot to a reliable market. The team is ecstatic as they see this as the beginning of a customer supplier relationship. 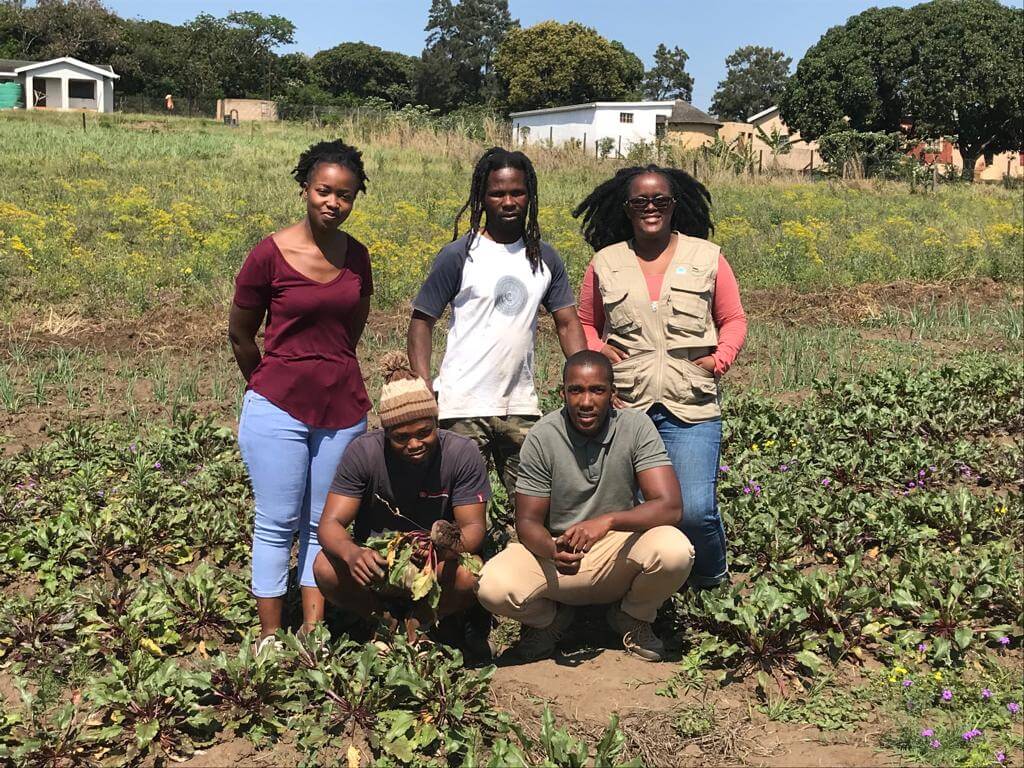 “The first thing you look for is: are these people serious about what they want to do? They [Fresh Harvest] don’t say they’re coming into agriculture because they saw a farmer from next door making a million [Rands] turnover and that’s where their aiming, but they don’t even have something on the ground.”